The Sony ILME-FX3 is the newest camera to join the company's Cinema Line alongside the FX6, FX9, and Venice.

As expected, the Sony FX3 is very similar to the Sony a7S III mirrorless camera. I could continue writing about what this camera is, but there are already countless numbers of articles and YouTube videos covering that.

Instead, here are the things Sony needs to add in a firmware update to make this camera more worthy of the Cinema Line namesake it has been given.

Waveform and shutter angle. Without an EVF, getting correct exposure on the FX3 will be a nightmare. A simple waveform display would alleviate some of that pain. I'm also a fan of the "set it and forget it" convenience of a 180-degree shutter. The FX3 is the only Cinema Line camera that does not have a waveform display nor a shutter angle option.

If Sony ever decides to add these features through a firmware update, the Sony FX3 Cinema Line camera will be a huge seller. In its current state, the FX3 is just not any better than the Sony Alpha a7S III, and it can be argued that FX3 is worse with a higher price point at $3898.

Playing the wait-and-see game with this camera seems to be the best thing to do. I believe the FX3 is a firmware update or two away from being on my shopping list. DCI 4K alone may be enough for me to switch so I can match aspect ratios with both the Sony FX6 and FX9 (and Venice) Cinema Line cameras. For right now though, I'll stick with my trusty Sony a7S III.

Email ThisBlogThis!Share to TwitterShare to FacebookShare to Pinterest
Labels: Gear and Tech, News

While being snowed-in during the freak winter storm here in San Antonio, TX, I realized the falling snow would make for a perfect time to... 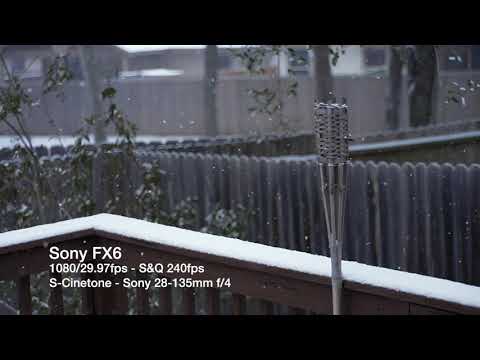